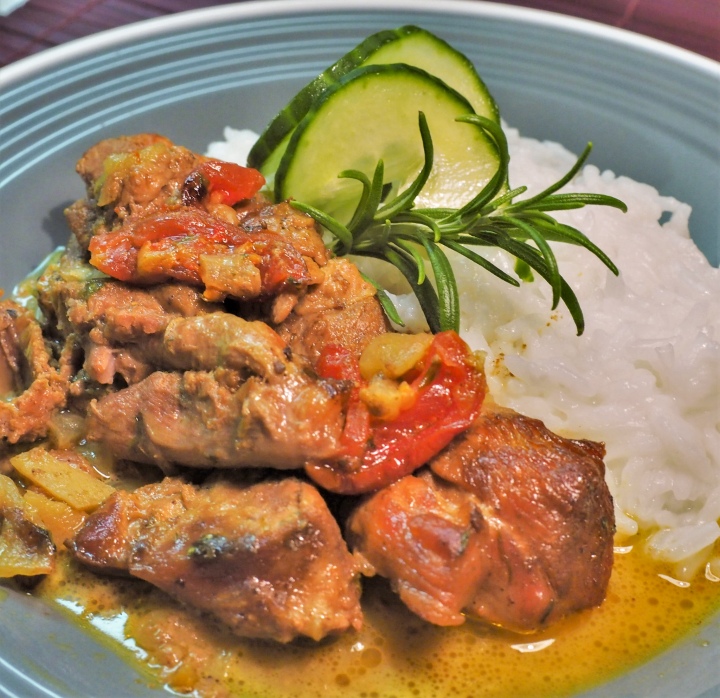 Korma is a dish originating in the Indian subcontinent,consisting of meat or vegetables braised with yogurt or cream, water or stock, and spices to produce a thick sauce or glaze.

Lamb korma is an excellent choice to make in a slow cooker. Preparations are pretty easy and after that you can let the pot take care of the rest. Very delicious dish, which absolutely is at its best when made of shoulder, one of the tastiest parts of lamb.

Some people have doubts about coriander and for that reason we have done this without it every now and then. Though the flavour of korma is based on a mixture of spices, including ground coriander and cumin, the result is just as tasty without coriander.

You can make this dish in the oven as well, of course. Simmering temperature about 180°C (356°F) and simmering time in the oven under a lid for about two hours.

Grind the coriander, black pepper and cardamom in a mortar until fine.

Cut the lamb shoulder in suitable sized pieces as much as you can around the bone.

Cook meat on a dry pan quickly on all sides, the bone does not have to be fried.

Put meat in the pot, as well as the bone.

Cut/chop onions, garlic cloves and ginger and add in the cooking pot.

Cut tomatoes in half and add in the pot.

Boil the water with the bouillon cube. Add spices (chili, coriander, cinnamon, cardamom, salt, black pepper) and cream in the broth and pour it into the cooking pot.

Cook for about 4 hours on high heat or 6 hours on medium heat.