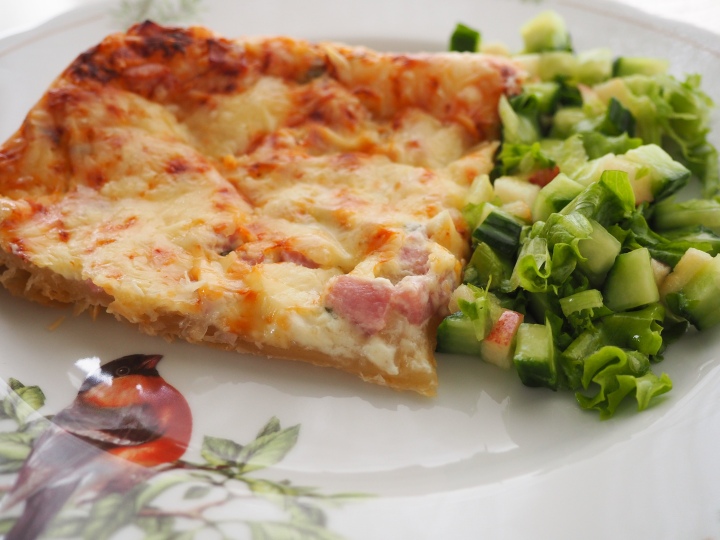 My mother used to make this pie a long time ago. Not to feed our family but to be served for guests. I used to make this for guests as well as for family meals. Tastes good when warm, but surprisingly it gets even better when cooled down. That’s why it has been a good banquet salty snack. I have no idea of the origin of this recipe – I have just followed my mother’s advice.

The amount of ingredients in this recipe does not fill the whole baking tray, but it is enough for four diners and as a small snack it’s enough from eight to ten people. If you want to make it bigger, just double all the ingredients.

Usually all of my bakings are gluten free, this one is not. It is due to the simple reason; so far I haven’t succeeded in making a good gluten free pie dough or a good puff pastry. And every single gluten free dough or pastry sold in stores is much worse than those made of regular wheat.

This very pie in the recipe has also been made from pre-rolled puff pastry. Only because it is so much easier to make.

Peel and chop the onion.

Cut the ham into small cubes.

Sauté the onion for a few minutes and then add the ham cubes. Let simmer for a while and add some black pepper.

Add Creme Fraiche and simmer just a little while. Add rosemary and mix well. Set aside.

On a parchment paper roll the pastry as thin as possible. Transfer with the paper onto a baking tray.

Spread the ham and creme fraiche mixture evenly on the pastry and cover with grated cheese.

Bake for about 20 minutes or until the pastry is evenly cooked and the cheese nicely brownish. Serve with fresh salad.