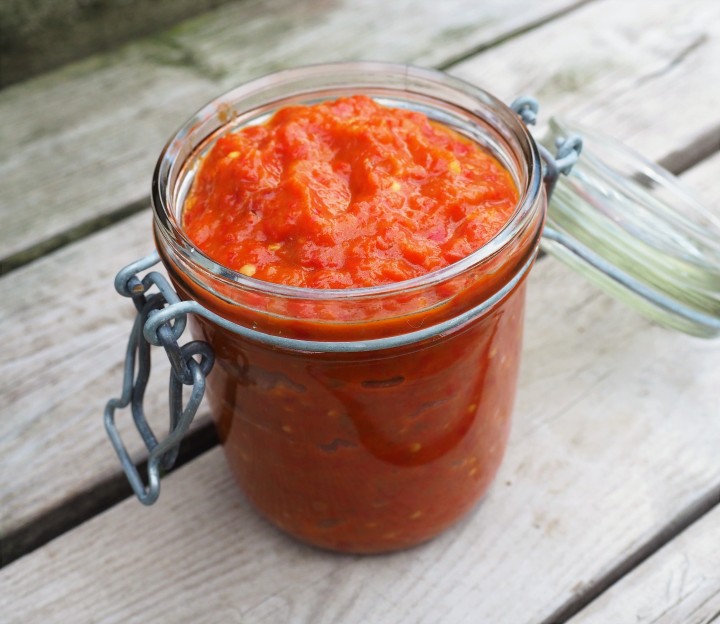 I can’t really tell if the recipes published on the newspaper Helsingin Sanomat every Thursday are exceptionally good, and worth testing, or is it simply because of me taking my time to read the paper every time. Probably the latter; world is full of delicious foods and recipes, but you don’t catch them the same way as you do when reading the paper. Even when searching recipes online, you need to know beforehand what you’re looking for.

An article written by Katja Bäcksbacka, published on Thursday Septemper 20th 2018, tells us about Balkan originated sauce called ajvar. Just the picture alone on the paper was enough to spark my curiosity, and after a closer look at the recipe I knew this is something definitely worth testing. We split the original recipe in half, but in hindsight, should have probably just made bigger batch right away. Sauce was served on one meal, but afterwards the rest simply disappeared overnight; my husband liked it so much that he half accidentally ate all of it straight from the jar whenever opening the fridge. We will definitely try this recipe again – and maybe make it double next time.

The sauce works really well with meat or chicken, but like the story tells, you can easily eat it with a sandwich for example – or straight from the jar. Sauce is ready to be served right after making it, but the taste will only get better if you wait until the next day.

We ate our ajvar with lamb steaks, and I have to say – this homemade sauce was so much better than any similar readymade ones from the store!

Slice the eggplant and place the slices on a piece of paper towel. Sprinkle salt on top to make the eggplants “cry”. This is not part of the original recipe, but I have noticed that eggplants taste a lot better after this little trick since it removes the bitter taste from the eggplants.

Leave the eggplants to cry for 15 minutes and preheat the oven to 200°C (392°F). After that rinse away the salt with cold water and dry the eggplants. Place the slices on a oven tray (use baking paper under), and let them cook in the middle section of the oven until they are soft. This will take approximately 30 minutes. You can use a thin, wooden stick to check if the eggplants are done.

Next set the oven on grill mode. Most new ovens have a saw-toothed symbol to indicate the heat, and you can use the highest one to grill the bell peppers.

Rinse the bell peppers, cut them in half and remove the stems and seeds. Oil a pan with a thin layer of olive oil and place peppers on it skin side up.

Put in the oven and grill until the skin is mostly blackened.

When bell peppers are ready, put them in a plastic bag and close the bag tightly. Let them cool off in the bag for about 15 minutes.

Peel the peppers and put them in a bowl with the peeled eggplants. Mix well with a hand blender or in a kitchen blender. Use the pulse button to conserve the slightly rough texture.

Cut the chili in halves, remove all seeds and mince flesh.
Peel and mince garlic cloves.

Heat up some olive oil (about two tablespoons) in a pot. Add garlic and chili and let them simmer for about one minute.

Then add mixed bell peppers and eggplants and let the sauce boil on low temperature for about 20-30 minutes.

Season with vinegar and salt and let still boil for about 5-10 minutes.

Check the taste and add salt to your taste if needed.