If I for some reason ended up on a deserted island and had to choose three different dishes to take with me the most obvious choice would be mushroom salad, raw salted fish and cinnamon rolls. While I enjoy all sorts of foods those three have a special place in my heart.

A mushroom salad tastes delicious with meat and fish and it is also great as a topping on a slice of bread, or even on its own. It is simply a dish I truly enjoy.

I’m not very fond of those salads sold in stores.Very often they’ve been cut in hopelessly small pieces and the mouthfeel is like eating mushroom gruel – and for some reason they are usually quite flavourless. The same thing goes for most salted mushrooms, which are also cut too small.

As I have already mentioned in one of my earlier blog posts I am fortunate enough to have a sister who loves to walk in the woods collecting mushrooms, and she has always made sure I have more than enough mushrooms.

The recipe below is meant to be enough for four diners as a side dish. Enough for “regular mushroom eaters”,  but not for my family.

This salad has been made of mushrooms preserved in salt. If you use fresh mushrooms, you have to cook and salt them slightly first and choose right kind of mushrooms: f.ex boletes, chanterelles, funnel chanterelles, false morels, gypsy mushrooms or champignons are not very good or tasty in this kind of salad.

More information about mushrooms and how to preserve them can be found in the blog post “Best food in the word – mushrooms”.

Put the sliced mushrooms in a sieve and rinse them first under running cold water. Put the sieve in a kettle filled to the brim with cold water – all the mushrooms should be properly submerged. Stir the mushrooms every now and then and change the water at least three times. Usually it takes about two hours to soak the mushrooms, but the time highly depends on the quantity of salt used in preservation.

Taste the saltiness and stop soaking when the mushrooms are still slightly salty. Better to keep them in water a bit too long than too short, because you always can add more salt later, but you surely can’t remove it. 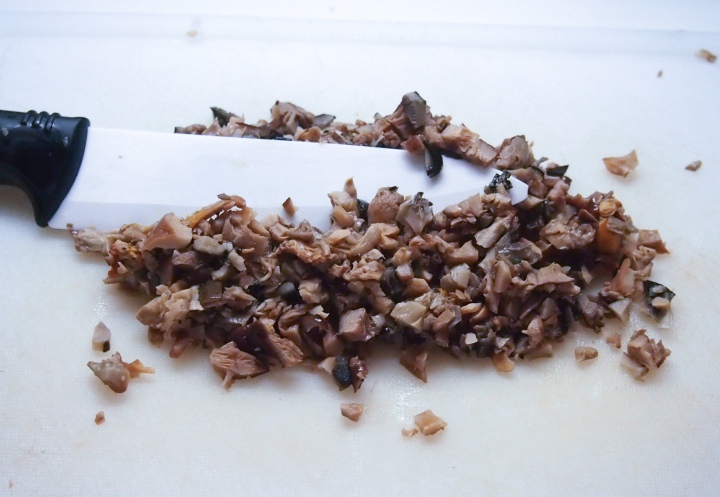 Chop the mushrooms into quite small pieces – make a hash like shown in the picture above. Put them in a bowl and set aside.

Chop the onion. The finer hash you have patience to do, the better is the result in your salad. Add the onion hash in the bowl (where the mushrooms already are) little by little and toss well, tasting after each adding: your taste buds will quite quickly learn to tell you when the combination is perfect: you should be able to taste both onions and mushrooms, but the taste of the mushrooms should be the stronger of the two.

Then add the smetana, also little by little until the mass is evenly covered with smetana, but not swimming in it.

Finally add the ground allspice. Sprinkle some, taste and sprinkle some more if needed. Allspice brings its fancy flavor to the salad, but too much is not a good thing.

You can easily make this salad a day before serving, it will stay fresh for several days, but it should at least rest in the fridge for a couple of hours before serving it.